Its been a cold, cold, winter.  I knew the climbs would be huge in Caribou creek but have suffered enough hypothermia back there for a lifetime and refuse to climb there if its below zero.  Luckily temps in anchorage warmed up to a balmy 25 degrees and Billmier was fresh and motivated.

There was only a dusting of snow on the river, and it froze wide and smoothe.  Travel was awesome, a bike with studded tires would have been awesome!  Lots of ice up river, I felt like a kid on Christmas with a new present around every corner.

A couple miles back... 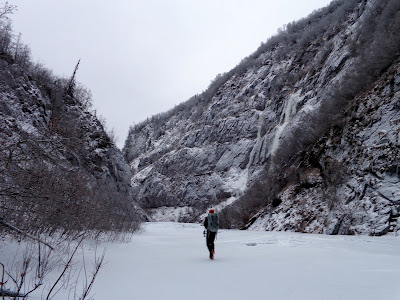 I'm not sure what these routes are called, a picture on the Alaska iceclimbing website shows a pic of the climb on the right in my pic and it had two names, STD and Life after the graveyard.  I have never seen these routes come in this big.  We ended up climbing the left hand route to the top of the canyon. 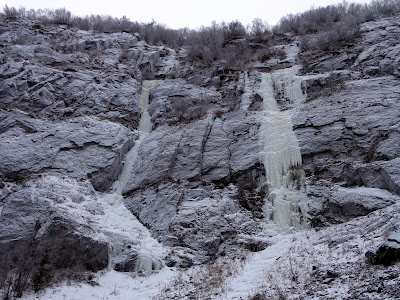 Even though Bill and I were both pretty captivated by the potential that we had already passed we decided to go to the end of the canyon to assess the whole situation.

The landslide that had constricted the river last year was completely washed away, and above the river 3 beautiful new routes. 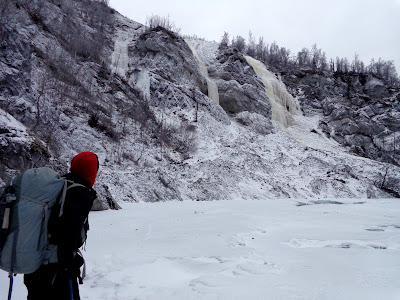 Cantellya was beautiful, not as big as usual, and no left hand flow this year, but still plenty of ice.  Robopick looked great, but the route at the very end, Thag-o-mizer was enormous.  Again, I've never seen this route this huge before...
Big routes at the end of the canyon 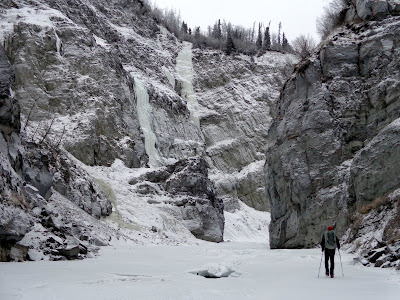 So much to do with only 4 hours of daylight left!!  We went back to the STD/graveyard area mostly because the opportunity to climb something rarely formed and new was to hard to pass up.
The first pitch was awesome climbing, super fun, and steaper than it looked, Bill lead in fine style. 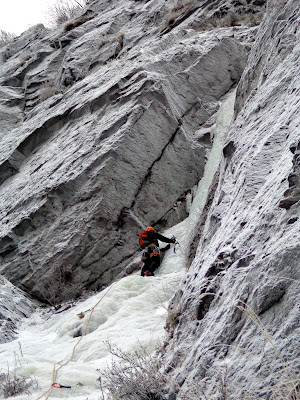 It took me about 30 seconds of deliberation to pass the lead of the next pitch to Bill.  It was super thin and scary looking...and that was before I saw the undercut bare rock section.  I couldn't see what Bill was doing, but he was going up and down in 5 foot increments....I really understood when it came my turn to hall my ass over overhanging undercut.
I wish I could have got a picture that did it justice, but the light was fading and I was rappelling. 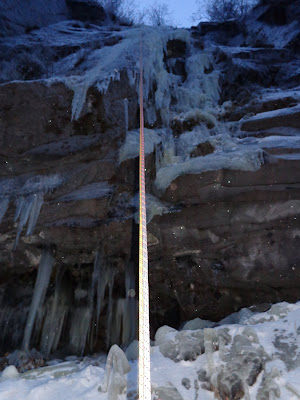 Bill and I at the Top 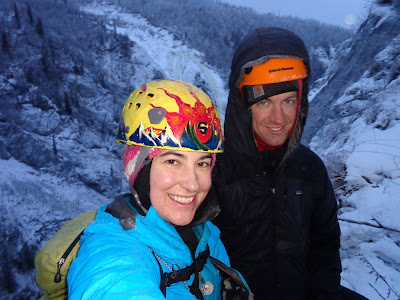 Slide Show of all the other climbs!
Posted by Sherrie Soltis

Sherrie Soltis
Anchorage, Alaska
I like to play outside...a lot.